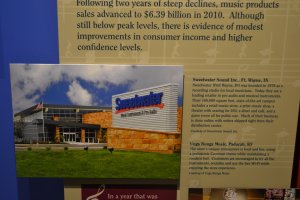 On our family vacation to San Diego last year, my wife and I visited The Museum of Making Music. It was a fascinating collection of musical instruments and bits of information about music making in America.

I suppose I shouldn’t have been surprised to see a prominent poster telling about my favorite music store, Sweetwater. But I was. I didn’t realize how important it had been over the years.

I have no idea how I learned about Sweetwater in the first place. Probably looking for a less expensive place to buy guitar strings than the local Sam Ash and Guitar Centers, neither of which is located really conveniently to where we live.

But wow! They had everything. Not just at lower prices than the brick-and-mortar music stores, but shipping was free. And no tax charged.

So I took a chance and placed an order online. I was able to use PayPal, which I prefer because that way I’m not giving any particular store my credit card information.

But then came a pleasant shocker. Within a few hours, I received a phone call from someone at Sweetwater explaining that he was my personal sales rep. He reviewed what I’d ordered, asked if I had questions, and told me to call or email him if I thought of anything else.

Within three or four days, I had my new strings. It seems that Sweetwater is centrally located—in Ft. Wayne, Indiana—and that minimizes shipping time to every part of the country. Nice!

But what was also nice was the tiny little plastic bag with a little Tootsie Roll and a couple of other small pieces of candy. Just enough to enjoy without feeling guilty.

Several days later I heard from my personal sales rep again. Just making sure I’d received my order and was satisfied with it.

What better service could I ask for?

Some years ago I read a book called Raving Fans. The idea was that businesses need to do more than simply strive for “satisfied customers.” How much better to go the second, third, and fourth miles and just dazzle the customer into raving about the service he receives.

I’m a raving fan of Sweetwater, and I think you can see why.

Let me share a quick tale about another store that specialized in acquiring raving fans. Back before Martins acquired Ukrops, a local Richmond grocery chain, I heard a conference speaker tell of being in a Ukrops store, looking for the green beans. When he saw an employee, one who was quite busy at the time, he interrupted and asked where the canned green beans were.

Rather than simply tell the fellow where to find the canned vegetables, the worker set aside whatever he was doing and led the shopper to the right aisle and showed him exactly where he could find what he was looking for. The employee made a raving fan out of that shopper, and that shopper didn’t hesitate to rave publicly—while giving a speech—about the service he’d received at Ukrops.

He made such an impression on the conferees that—from that day on—many of us started referring to going all out to please a customer as the “Ukrops principle.”

Has any place of business—perhaps even a place where you’ve worked—turned you into a raving fan? How about sharing in a comment?