Last weekend I was checking Amazon to see whether THE DEVIL AND PASTOR GUS had any new reviews. It had been stuck at forty-six for a few weeks, but had continued to enjoy a 4.3 star average rating.

When I saw that it had jumped to forty-seven, I was elated. My goal after reaching twenty-five had been fifty. Maybe I’d get there yet.

But then I looked at the review title, “Possibly the worst book ever written,” and the one-star designation; thank goodness Amazon doesn’t have a no-stars option! After the reviewer admitted being an atheist who’s read some good Christian fiction, she proceeded to give her opinion of everything she thought was wrong with the book, concluding with “Seriously, this story is worth skipping.”

As an author, I’ve grown increasingly thick-skinned over the years. After all, not every book is for every reader, and PASTOR GUS was obviously not the right read for this lady. I respect that, and I don’t even mind her leaving that kind of negative review, even though it lowered GUS’s rating from 4.3 to 4.2. Potential readers are probably too impressed by good reviews to pay attention to horrible ones.

Nonetheless, reviews like that–PASTOR GUS’s only other one-star review was written by a Christian minister–make me wonder. Not about the reviewers’ lack of interest in one of my books, but about the reason for writing such  almost-angry reviews. Did the book hit so close to home that it made the reviewers defensive?

In the case of the Christian minister, I had to laugh because Pastor Gus talks in one scene about the fact that a large number of preachers will claim Gus isn’t a Christian and ban the satire he’s writing about the devil (which is ultimately THE DEVIL AND PASTOR GUS), making members of their congregations start buying copies in record numbers.

Maybe I just have a different way of looking at reviews. Writing them, I mean. Although I really have to love a book to give it five stars, I don’t hesitate to go with four if I only just like it a lot. I may feel a little guilty if my four star review is the first for someone who has all fives, but I think that helps to give some legitimacy to the whole review process. Just as my one-star reviewers do.

If I really dislike a book, I may or may not finish reading it. But I’m not going to review it. Why should my opinions prejudice other readers who might perceive that book in a much more positive light?

When I write reviews, I try to find something good to say about the book. As many good things as I can think of without sounding like I’m gushing. If I feel the need to share something negative, I try to make it sound as inoffensive as possible. Like saying that the number of mistakes in the book must have resulted from the publisher’s poor editing and therefore aren’t the author’s fault.

One of PASTOR GUS’s best reviews was actually a three-star written by the wife of a minister who’d given it five stars; that man got it! What she did was to give a very balanced view of her likes and dislikes, along with examples. It was NOT an angry review. It was a helpful one. The kind I hope I write most of the time.

Authors depend on Amazon  and Good Reads reviews. Reviews help potential readers decide whether to make the plunge and buy their books. If you don’t regularly review books you’ve read, I urge you to start doing so. They don’t need to be lengthy or complicated. A simple “I liked this book because…” or “This book wasn’t really for me, but people who love (whatever) will probably love it.”

What do you think? How about leaving a review? Uh, a comment, I mean. 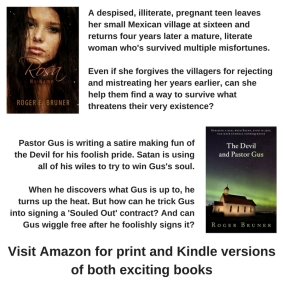