I used to have another blog–IF YOU COULD READ MY MIND. This is something I posted on July 27, 2011.

Who do you talk to when you want or need to open up?

From what I’ve seen on television, the listener of choice for many people appears to be the local bartender. Of course, that’s a toughie for those of us who don’t drink or want to hang out in bars.

Hopefully, most people with serious emotional problems get professional help. I doubt that I’m the only one who’s thankful for that kind of listener.  Professionals like those may be paid to listen, but at least they’d supposed to be objective.

But what about those of us who just like to talk or want to unwind verbally?

My six-month dental checkups are a lot more pleasant–even fun at times–because my dentist and his hygienist have both gotten to know me so well that I can talk to them about a number of subjects I wouldn’t talk with the nice fellow at the 7-Eleven down the street about. They listen, they feel free to ask questions, and they really seem interested in more than just the health of my teeth.

But you know what? I’d much rather share items of interest with my wife. She’s an even better listener than the folks at my dentist’s office, and she knows me well enough to put things in the proper perspective. She can usually say the right things in response, and I couldn’t ask for a more receptive person to talk to. And let’s not overlook the fact that I can talk to her about  things I wouldn’t mention to my dentist or his hygienist.

Things I wouldn’t mention even to a some other friend. After all, she’s my best friend. Best earthly friend, that is. So why settle for less than the best?

But what about those secret–or at least those private–thoughts a person doesn’t feel comfortable talking with any other human being about? (If you don’t have them, too, I’m in serious trouble.) Most of mine are too silly to talk about. Or maybe I’ve talked about similar things so much I hesitate to revisit a path that I’ve already worn bare. Maybe I’m just being irrational because it’s the middle of the night, and my thoughts aren’t worth waking my wife over.

God, however, is still in the listening business–not His primary one, of course–and I’m thankful for that. Nothing is too silly, repetitious, or inconveniently timed to call to His watchful attention.

Of course, I do have a little problem talking to someone I can’t see. Someone whose parts of the conversation are not audible. I often have to remind myself that prayer doesn’t mean talking to myself.

God is real. He’s not only “out there,” but inside me, and He’s always listening. I don’t even have to verbalize my thoughts. Sometimes I can’t. But I always make sense to Him.

Even when I don’t make sense to myself.

I can’t explain how God can be in tune with all of His children at the same time–there are millions of us–but I believe He is. And He’s the most perfect listener of them all. He has answers–perfect answers–even though the answer is often “no” or “wait.”

And for those prayers not requesting an answer? The ones where I just want to talk with Him because He is my heavenly Father and He loves me? And He wants me to talk to Him because I love Him, too?

I imagine Him saying, “I hear you, son!” and giving a big grin of approval.

What greater blessing could this talker ask for?

P.S. I’ve just republished PROJECT MUFFINTOP as JUST FRIENDS? (Yes, the question mark is part of the title.) Friends at the Facebook group Avid Readers of Christian Fiction had convinced me that my original title and cover weren’t teen friendly. I hope they–and teens, too–will find this more appealing. 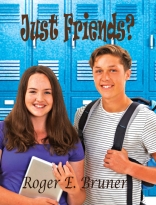