I’ve mentioned periodically that I like to walk at the mall. With my wife three nights a week and on Saturday and by myself an additional three or four times a week. It’s not only great exercise, it’s also become my favorite prayer time.

I pray for my fellow walkers, even though I don’t really know more than a couple of them–and those not well. But that’s changing.

The past few days I’ve become particularly fond of an older black gentleman who walks with a couple of other fellows. He’s always stuck out in my mind, however, because he carries an adjustable cane, which I’ve never seen him use.

But he recently expressed an interest in my collapsible trekking pole. I told him I’d bought it for $20 at the Bass Pro store that’s less than five miles from the mall, and he planned to have his son drive him there to get one. (He lives near the mall and takes back roads to get there to avoid heavy traffic, which is probably why he chose not to drive to Bass Pro himself.)

And–lo and behold!–he showed up to walk this morning (I’m writing this on the Wednesday before you see it) with a trekking pole just like mine.

He and a friend had just completed their walk at the same time I did, and I asked if I could take their picture, which they willingly agreed to and jokingly asked whether I was going to put it on Facebook. At the time I thought I would, but then I decided to write about today’s events and include the picture here. 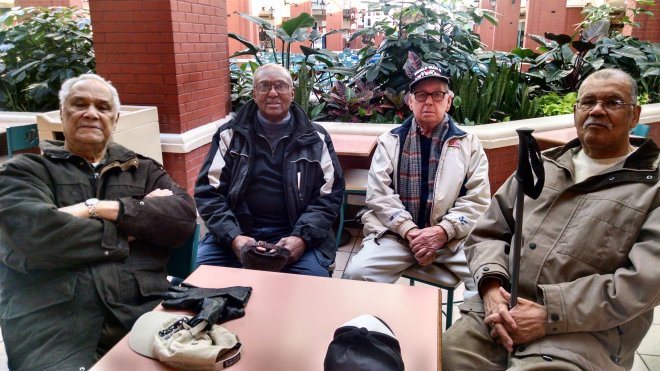 Before we were done, two other walkers joined us–one black, one white. I took another picture–how I wish I could’ve done a selfie of the five of us–and we all sat down together. I learned that my trekking pole friend is Chris and the fellow who’s been with him was Al. The two additional fellows were Sam and Jerry.

We had a great time talking, and I explained that I would love to walk with them, but because of my praying while walking–I told them I pray for them as well as my other co-walkers–I preferred to walk alone. They not only understood, but appreciated what I’d told them.

While nobody said anything specifically about being a Christian (or not), I felt very much at home in this little group.

So why did I title this post “Now Is Better than Then”?

As much as I hate to think about it or even admit it, if this had occurred sixty or seventy years ago–perhaps less– well, it probably wouldn’t have happened. Black people walking at the same place as white people? Preposterous. And speaking enthusiastically to one another as equals as we passed each other? Not likely.

And sitting down together in a time of true fellowship, two older white guys and three older black fellows? It wouldn’t have happened in those (questionably) “good old days,” would it?

I have no memory of those days, and I’m not making any claims that racial equality has progressed as far as it needs to, but I am sincerely thankful it’s gotten far enough for me to make friends, even in such a limited way, with three fine black gentlemen who share the same interest in walking and talking.

I usually try to ask a pertinent question to get you to leave a comment, but I’m fresh out of pertinent. So instead I’ll just ask, “What do you think? How about leaving a comment?”