Our pastor and his two adult children have built houses almost within spitting distance of one another, and that seems to work well for them. My daughter’s in-laws are living with them, and I assume that’s working out okay. I can think of several couples who’ve moved to be closer to their grown children, and they’re undoubtedly thrilled at being that close.

I definitely don’t mean to sound critical of any of those situations. I’m simply admitting that I don’t understand that kind of family closeness because I can’t relate to it.

I grew up an only child, and my parents reared me to be fiercely independent. They soon realized they’d exceeded their expectations. After college, I lived about two hundred miles from my parents for sixteen years, and I didn’t move to Richmond to be near them, but because that’s where I’d finally found the kind of job I wanted at the place where I’d long wanted to work–the International Mission Board of the Southern Baptist Convention.

I didn’t normally see them more than once every couple of weeks and rarely talked to them on the phone. We loved one another, of course, but they had their lives and my wife and I had ours.

I suppose my lack of understanding of the situations I described above is based in part on thoughts about the summer when my first wife and I realized the sales job I’d just gotten wasn’t going to work out. We ended up driving nine hundred miles to spend the rest of the summer with her family.

I’m not sure that feeling the need to do that bothered me consciously at the time, but I realize now how I sacrificed my independence for the sake of expediency. At least it was only temporary.

Don’t get me wrong. As the grandfather of two little boys and the step-grandfather of another, all of whom live quite some distance away, I regret not being able to see them more frequently. But those two sets of parents have their own lives, and we’re careful not to interfere.

That would be more difficult if we lived extremely close to one another.

I’m always tickled at the thought of couples moving to be closer to family only to have their family move elsewhere shortly after that. I can’t say I’ve known of that actually happening, but it could–and it probably has.

When God said a man should leave his mother and father and cling to his wife–I’ve always believed that to be equally true of wives–I think He really hit the God-sized nail on the head. Husband and wife must come first. That seems to be true in the cases I mentioned earlier.

What about you? What are your thoughts on this? How about leaving a comment.

It’s Sunday morning, and I’m writing this post before leaving for church in the hopes it won’t be too late.

Kathleen and I just got back last night from our week at the Isles of Capri, Florida. There we spent time with Kathleen’s single daughter, her younger daughter (with hubby and toddler), and my daughter (with her hubby and two kids, one of whom is still a todler). This trip had been in the planning stages for close to a year. We rented a huge beach house, where each of the four family groups had a separate bedroom and bathroom. This is the house.

And this is all of us.

Although the weather had threatened to be rainy all week, that prediction proved pleasantly inaccurate for the greater part. Although we enjoyed trips to the beach, we spent a lot of time at the house playing Uno and Five Crowns and in the pool. You may not realize this, but pools in Florida are typically totally enclosed and screened in. Unfortunately that didn’t keep the NoSeeUms from feasting on us the first day; I’m still covered with bite marks. 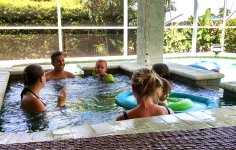 Although we opted not to rent a boat, our house backed up to a canal that was perfect for fishing. It had been years since I last fished, but I loved it. Especially the day I caught three catfish. We always threw the fish back, though.

We had our meals all planned out, with each family unit responsible for one dinner. I couldn’t count the number of runs we made to Marco Island (about three miles) to pick up additional food from the nearest Publix grocery store.

Kathleen and I did a few activities on our own. We ate breakfast out three times at this place, BREAKFAST & MORE. After eating there the first time, we didn’t want to go anywhere else.

Our biggest adventure was a trip to the Everglades, where we went on two air boat rides and a swamp buggy ride. To say the least, we learned a lot about the Everglades during the five hours we spent there. Did you know the Everglades is the only place in America that has both alligators and crocodiles? That’s because fresh and salt water come together in certain areas.

I could go on and on, but I think I’ve said enough for today. As so often happens, I served as the resident photographer of our family get together–I failed to mention earlier that we came from Richmond, Virginia; Las Vegas; New York City; and Orlando–and I spent a lot of my time editing pictures with the Affinity Photo software I’d bought just a few days before heading south. 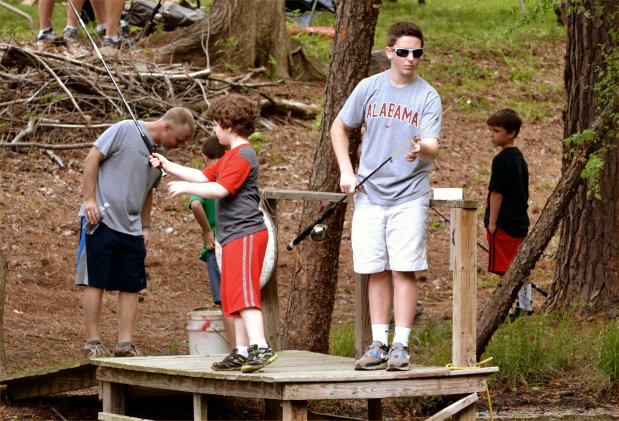 Tomorrow (I’m writing this on Friday), weather permitting, Winn’s Baptist Church will hold its annual family fishing day at the home of the Dukes. No, not the Dukes of Hazard, but two fine older folks from church who own a pretty decent-sized pond and are more than happy to have visitors.

I’ve only missed one of these events in the past four or five years, and that was only because I was going to be out of town that day. I really hated having to miss it. I love taking pictures, and I really enjoy using whatever photographic skills I have to capture and preserve the day’s family atmosphere.

That means I always have my camera in hand and not a pole, however. That’s a shame. I really enjoyed fishing as a kid. I recall when my father periodically drove me out to the home of a church member who had a pond. Unlike the Dukes’, however, there weren’t any trees nearby. My most vivid memory is of using a bamboo pole. When’s the last time you saw one of those babies?

And then there was the time we were vacationing somewhere on the coast of North Carolina and my father took me fishing. You have to understand that my father was never a sportsman. Not even a fisherman. But he was a good sport about it. The highlight of that day was the blowfish one of us caught. I believe we took it back to the cabin, but decided against trying to cook and eat it. Good thing. I believe those are poisonous if not treated properly.

As an adult I used to go to a nice park that wasn’t too terribly far away. It had a wonderful lake, and people were permitted to fish there. I assume they needed licenses, but I had neither license nor gear, and I knew I wouldn’t go there often enough to justify the expense. A real shame, though. Laid-back fishermen waiting for a bite look a whole lot more relaxed than bowlers and other sports participants.

Maybe I should put the camera down for a while tomorrow and do that kind of relaxing myself.

What about you? Do you enjoy fishing? Eating fish? Whatever? How about leaving a comment?

P.S. Although the weather was a bit overcast yesterday, the crowd (see the picture above of folks enjoying the hot dog lunch) was even bigger than usual. We had a great time!

I just got back from visiting family in Nicaragua.

No, I’m not any more Latino than my name would imply, and I’m not related by blood to those family members. Not in the regular sense, that is.

I’m related to them through the blood of Jesus Christ. I have similar family members throughout the world. It’s truly amazing to visit that kind of family in foreign countries and discover the same kind of love and acceptance I share with my fellow Christians here in the United States.

Going on mission trips is supposed to be a blessing to the people we visit and minister to, and I pray that it is. But it’s always a blessing to me.

Especially with this trip to Nicaragua, which is the second poorest country in Central America. Among other ministry activities, we distributed food packets to needy families and gave new shoes and socks to a number of children. I plan to be more specific in future posts.

Have you been on a mission trip? Do you understand what I’m saying about the sense of being family with the Nicaraguan Christians we visited? If so, please share a comment.

I’ll be back again on Sunday. If you’d like to receive my posts by email, just go to the top right of this page where it says, “Follow Blog via Email.”

By the way, “On Aging Gracelessly” isn’t my only blog. I use “As I Come Singing” to post lyrics of the Christian songs I’ve written over the last fifty years. Free lead sheets (tune, words, and chords) are available for many of them. Check here to see the list.