I’ve seen enough pictures of the Holy Land to appreciate how important a walking stick must have been in biblical times to anyone traveling by foot. Not only for stability, but maybe even for defense against robbers and wild animals.

I’ve been reading from the Old Testament the past few weeks, and I’m in Exodus now. It’s been interesting to read once more about Moses throwing down his staff–I’m assuming that’s the equivalent of  a walking stick–and having it turn into a lively and rather frightening snake. And then God telling him to pick it up  and turning it back into a staff.

Later on, when the Children of Israel were complaining about the lack of water, God told Moses to strike a rock with his staff, and that made water flow from a rock. If I remember correctly, Moses got in trouble with the Lord later on when he tried to do the same thing on his own initiative and not because God told him to. In fact, wasn’t Moses’ disobedience the thing that prevented him from being permitted to enter the Promised Land when they finally got there?

I’ll bet Jesus used a walking stick, too. He certainly did a lot of moving around from village to village, and He and His disciples had to walk. I often wonder what His walking stick looked like. No matter what kind of wood it was made from, I suspect it had a well-worn look by the last time He used it.

I often use a walking stick, too. Not because I can’t walk without one, but because I can trip over a line in the floor. So it’s especially important for me to use one when walking at the mall or in the neighborhood. In addition to adding stability, it helps me keep my rhythm in walking. Unlike walkers in Jesus’ day, I doubt I’ll need it for defense, but you never know. 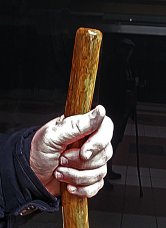 Even though a physical walking stick like you see me with in this unusual selfie adds stability to my physical movements, what’s ultimately more important is leaning on the Lord for my overall walk through daily life. David knew what he was talking about when he wrote in Psalm 23, “Your rod and your staff, they comfort me.”

Those words of assurance are comforting and good to lean on.