[NOTE: I wrote this prior to hurricanes Harvey and Irma. Currently in Richmond–at least at the gas stations closest to us–prices have already risen to $2.49 and may easily go higher because of the hurricanes’ effect on oil production and processing.] 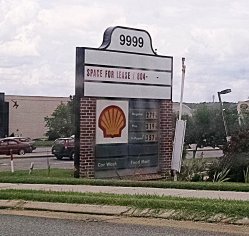 If you’re ever on Interstate 95 going through Richmond, Virginia, and looking for gas, you can take exit 86A towards Atlee and find a reasonably priced Sheets station a mile or two up the road.  Or take exit 86B towards Elmont for an equally reasonable Wawa station that’s probably a little closer. The right-hand picture above shows Wawa’s sign; the station itself is much more visible. Almost within spitting distance is a little BP station–you’ll recognize it as a former 7/Eleven store–that’s usually just a penny or so more expensive than Wawa and Sheets.

But heaven help you if you are on Rt. 295 getting off at the Rt. 1 exit going north towards Ashland. You’ll eventually come to the Shell station pictured on the left above. Even though it appears to be the only one in that neighborhood, the Wawa and BP stations are actually only a couple of miles further. But if you’re like us, you probably don’t want to drive additional miles to gas up when traveling, even if you know other choices exist further up the road. You want to get back on the road.

If you haven’t clicked yet to look at larger versions of those two pictures, you might want to do so now.

Did you notice the difference in gas prices? $2.11.9 for regular at the Wawa and $2.79.9 at the Shell! That’s a sixty-eight cent difference.

I doubt seriously whether the Shell station gets much business from us locals. And no wonder. If I waited to get gas until the fuel gauge told me I really needed to, I would spend at least $6.80 more than I would at Wawa, Sheets, or even the little BP station.

My wife and I periodically take road trips, and I’m always thrilled that my Honda Civic that only gets 25-28 mpg in city driving makes it up to 45 mpg on the highway. Even so, I don’t want to pay more for gas than I have to. I could be wrong, but I doubt seriously that I’ve ever been charged unreasonably at a highway-accessible gas station.

Hmm. Maybe because of competition?

And the Shell station doesn’t really have any competition. Or at least it appears not to.

I feel so sorry for travelers who stop at the Shell station. Not just because paying that much more for gas than they should might be hard on peoples’ budgets, but because I hate the thought that their only memory of Richmond might be the way they got fleeced by somebody’s greed.

I’d be embarrassed to be that greedy. And to know I’d angered and frustrated numerous other people because of it.

What do you think? How about leaving a comment?