So, those of you who have children, which one is your favorite?

Wow! What a loaded question…and a ridiculous one. Obviously asked by someone like me who has a single child, one who by default will always be my favorite without regard to any of her wonderful qualities or even of her less desirable ones.

But I do have eyes and ears, and I’m apt to have my favorites among the offspring of families who have multiple kids. Maybe it’s because one always speaks pleasantly to me whereas another doesn’t seem to notice me, even when I speak to him. Or maybe one has a talent I especially admire and enjoy, but the abilities of her siblings don’t t hold any special interest to me.

Maybe I even prefer one child over another because she’s safely made it through the worst part of adolescence and the other kids are either still just children or younger teens I’d be willing to loan the parents a cage for.  And I’ll admit it: a cute kid warms my heart more easily than an average-looking one.

I don’t see anything wrong with my having preferences among other people’s kids. The important thing is I recognize that most parents either don’t like one of their own kids better than another or wouldn’t admit it even under oath.

Believe it or not, I CAN relate to that fact. Especially if I change the question to this:

Roger, of the books and songs you’ve written, which is your favorite?

Hmm. My favorite of the over two hundred songs I’ve written during the last fifty-some years?  And the favorite of my twelve novels, four of which have been or are about to be published?

Wait! Those are my children you’re talking about! How can you expect me to have a favorite? Each one was my favorite–or at least the most important one–at the time of its “birth.”

Sure, I keep a separate binder of the songs I don’t have any interest in anymore but don’t want to forget about totally. And several of my novel manuscripts just don’t seem to be what publishers are currently looking for; so I can pretend to forget about them.

But they’re still my children. All of them.

My wife knits and crochets.  A friend makes the most amazing things out of wood. Could they name the one project they would be willing to label their absolute, all-time favorite? I seriously doubt it.

And what about you? If you have a creative skill, would you be able to say that one particular creation was not just your favorite, but will probably always be your favorite? How about leaving a comment?

Oh, and I promised last week to give the answer this week about what those little gadgets I was writing about are called:

At least that’s what some of the ones on Amazon were called. My wife and I were shopping at Hobby Lobby yesterday and found a package of them totally unexpectedly. And the package was labeled more simply:  Cord Stop Plastic. What a hoot!

NOTE: Various people have complained about not being able to find or leave comments. Go all the way to the bottom of this post, beneath my “Best regards, Roger.” On the very bottom line of that last section just above the previous post you’ll see “Leave a Comment” if yours will be the first or “X Comments,” where  X denotes the number of existing comments. 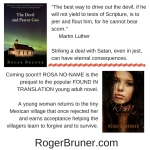