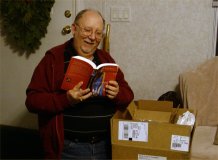 Few things are as fulfilling as spending a number of months writing a book–in my case a novel–and finally seeing it in print. And not just in my own hands. But on Amazon. And in bookstores. Local bookstores where people you know–and who know you–shop. And knowing it may be in bookstores all over the country–maybe even the world–in places you’ll never know about, much less see in person.

Ever since writing my first novel, I’ve had a stream of people come up to me and say, “I’m working on a book” or “I really want to write a book.”

Understandable. They say (although I’ve never known who “they” are) each of us has a book in him or her. For better or worse, that’s where most novels remain–inside the well intended dreamer.

No wonder. Writing is hard work.

Some would-be writers have a sufficiently firm grip on their story that they can sit down at a computer and peck away for hours at a time. Some real writers can do that, too. But real writers also know there’s a huge difference between having a completed draft and a manuscript that’s worthy of being accepted by a publisher–one who will spend countless thousands of dollars putting it into print.

Most people never even start that book that’s in their head. Whether they don’t know where to start, fear failure, or simply can’t commit the necessary time to a writing project, I can’t say. But at least those people will never face the heartbreaking challenge of trying to find an agent and a publisher and endure the grueling process of seeing their babies birthed.

Ah, you say? But anyone can self-publish now. Kindle Direct and CreateSpace (also an Amazon program) allow anyone with the patience to follow the directions to publish their works at no upfront cost. So why worry about traditional publishers?

I’ll tell you a secret. I self-published my first novel. As an English major who’d won the English Department’s honors award as a senior, I thought I could write well enough to bypass the trauma of becoming published by a traditional publisher. What I wrote–and spent hundreds of dollars just to get into print–was correctly spelled and grammatically correct. My cover was imaginative; I may not be a graphics design expert, but I have fun doing my best at it.

But I didn’t realize that my novel wasn’t that well written. Fiction had changed since my student days, and I didn’t have a clue that I had written and published something that wasn’t worth reading.

Not until I started attending writers conferences and studying writing books by the dozen; I have well over a hundred writing books in my library now. Print copies. (See the right hand picture above.) I have several dozen others on my Kindle.

Learning how horrible my first novel was served as a necessary first step towards writing two novels that have been published and a third that’s due out at the end of this month. Years of learning and practicing separated my first effort from my first real success.

Yet how many of those self-published books have been written by people who don’t even have the background I did just by my having been an English major in college?

Let me give you an example of what seems all too typical. I know of a certain novelist who also writes writing books and gives seminars about writing. He is self-published. When one of his novels went on sale for $.99, I decided to give it a try. Although the story was somewhat engrossing, I kept tripping over mistakes a competent editor wouldn’t have missed. So was I going to spend even a few dollars for this same guy’s book about effective editing?

Writing is hard work, and editing is even harder. Talent cannot be learned, but better writing and editing can. Producing a book that’s worth reading is a lengthy and complicated project, and becoming a good writer means constantly desiring–and working towards–being a better one.

I’ve been blessed with knowing a number of “successful” novelists. None of them is satisfied that (s)he can’t do better next time.

That’s my goal, too.

What about you? Do you have a novel–or perhaps a non-fiction book–just burning to be written? Have you started it? How far have you gotten? Etc.? Please leave a comment.

I’ll be back again on Wednesday. If you’d like to receive my posts by email, just go to “Follow Blog via Email” at the upper right.

“On Aging Gracelessly” isn’t my only blog. I post lyrics of the Christian songs I’ve written over the last fifty years on “As I Come Singing”–check it out HERE. Free lead sheets (tune, words, and chords) are available for many of them. View the list HERE.

Be on the lookout for my next novel, The Devil and Pastor Gus, which releases on November 25.