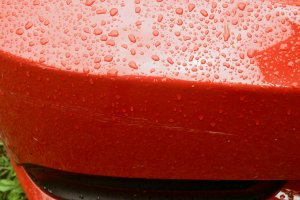 I love my red Honda Civic. It’s not really a sports car, but it’s far sportier than anything I ever had before, and at least it’s not so low to the ground that I have any trouble climbing in and out of it.

But I’m mature enough to recognize that it’s just a thing. When I die, I won’t be riding that Honda to Heaven. I suspect the ride there will be more like being transported, a la Star Trek.

So in spite of the fact that I take the car to be washed periodically and have it waxed probably two or three times a year, I know it will eventually lose some of its luster. Dings are bound to happen. I’m not the kind of person to use two parking places to protect my car.

But I never expected that I would be responsible–in an innocent kind of way–for the slight damage my poor car has undergone.

I was driving to a body shop to pick up my wife and accidentally turned left one driveway too soon. The parking lot looked like the kind that would connect with the roadway I should’ve taken. No such cut-over in the lot, but the driveway led further back. I thought surely I could find a cut-over there.

Hmm. Great idea except for one little thing. Even as slowly as I was driving, I didn’t see a wire hanging low between two posts. Apparently to keep people from driving back there. No sign of a ribbon or marker to make it obvious.

But I heard it. When it ground against the front of my car–what ever happened to bumpers?–and snapped.

I’d not only broken the wire, but put some very conspicuous yellow dings low on the front end of my car. As upset as I was, I could only shake my head at what I’d failed to see and consequently done to my car.

It didn’t matter whether it was my fault or not. As far as my car would be concerned–if it had the ability to assess the situation–I’d done something really dumb.

As it was, the body shop where I was picking up my wife was able to do some minor surgery and a paint touch up for fifty-some dollars. (Fortunately, they’d been working on another car that used the exact same color paint. I didn’t ask whether it had also broken the wire next door.)

I can’t look at the front of my car without thinking about the dumb thing I’d done without even realizing it. Isn’t that typical of many of the mistakes we make in life? We fail to see the barriers, which may be small or inadequately marked, and plow right into them.

How about you? Have you ever experienced anything similar? Please leave a comment.

I’ll be back again on Wednesday. If you’d like to receive my posts by email, just go to “Follow Blog via Email” at the upper right.

“On Aging Gracelessly” isn’t my only blog. I post lyrics of the Christian songs I’ve written over the last fifty years on “As I Come Singing”–check it out HERE. Free lead sheets (tune, words, and chords) are available for many of them. View the list HERE.