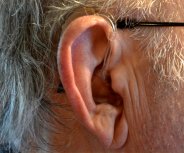 Who would ever have thought that listening to loud music over headphones during the latter sixties and early seventies would have had such a detrimental effect on my hearing? Yes, of course the problem might just be advanced age, but who wants to think of himself as old enough to have hearing problems?

I’m sure I heard warnings about the dangers of loud music–when I turned the volume down far enough to hear the warnings–but I certainly didn’t pay that much attention to them. After all, I was years away from being old enough to have problems.

I’m not sure how old I was when I first became aware that my hearing had deteriorated. The obvious problem was the fact that my (not yet ex-) wife always mumbled.

Nonetheless, I looked at the price of hearing aids at Costco and decided I needed to start saving. The day would come when I would HAVE to do something before I ended up agreeing to something horribly wrong because I hadn’t heard about it correctly.

Saving at that time was a losing battle. So I continued to hear less and less accurately.

Years later I had to admit that the time had come to do something. If I’d ever been self-conscious about having people see me wearing hearing aids, those days were gone.

So I went to Beltone. Maybe not the least expensive choice I could have made, but they have quality products and excellent follow up service. I had to take out a loan to pay the $3000 each for the hearing aids I still use.

I’m concerned that these may no longer be doing the trick. That is to say, I keep asking people to repeat what they say a lot more than I’d been doing.

But my wife and I have determined–thanks largely to Dave Ramsey’s Financial Peace University–to get totally out of debt, and we’re getting really close to doing that. Early next year my car will be paid off, and that’s the last thing we owe any money on. After that, we plan to sock money away into our Emergency Fund for a while.

So it looks like I may have to settle for the current hearing aids until we figure out how to do something about them without going against our financial plans.

If you’re one of the people I keep saying “What?” to, please understand that I’m just a man of age with a problem of age.

How’s your hearing? Any signs of problems yet? How about dropping a comment here to tell us about it.

I’ll be back again on Sunday. If you’d like to receive my posts by email, just go to “Follow Blog via Email” at the upper right.

“On Aging Gracelessly” is only one of my blogs. On “As I Come Singing”—check it out here–I post lyrics of the Christian songs I’ve written over the last fifty years. Free lead sheets (tune, words, and chords) are available for many of them. Check here for a list.